Parents Who Host Lose the Most:
Don’t be a Party to Teenage Drinking

A public awareness program educating communities and parents about the health and safety risks of serving alcohol at teen parties. A program of Drug Free Action Alliance.

Every drop of alcohol consumed by someone underage comes somewhere along the line from an adult, whether by intent or by negligence. The Chautauqua County Underage Drinking Task Force, with the talents of local, county and state law enforcement, is working to protect our kids and their futures by preventing underage drinking. Every adult determined to have facilitated underage drinking is subject to arrest and criminal prosecution.

The UDTF has brochures with important information that you can share with others in our community. The UDTF needs your help. If you would like more information, please email us at info@casacweb.org.

Big beer companies pretend not to target youth, while their slick, teen-friendly marketing saturates TV, the Internet, sporting events, magazines—everywhere. And beer executives use their lobbying muscle to block proven strategies that reduce underage drinking. Why? Because up to 20% of their profits come from underage consumption.

Let's fight back. Demand effective alcohol policies from our elected leaders, and tell your friends and colleagues too.

Over 5,000 young people die each year from alcohol-related causes—a sobering problem. Meanwhile, most elected leaders, influenced by alcohol industry lobbyists and contributions, have done little to prevent this tragedy. It's time to address this problem with proven polices that curb underage drinking.

What do I say to parents who argue that providing alcohol to teens teaches them to drink safely?

Tell them it’s against the law! 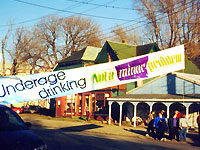 Hosting a prom or graduation party where alcohol is available to underage youth is illegal and can pose serious health risks and legal ramifications for everyone involved. Parents should understand that taking away the car keys does not solve all of the problems related to underage drinking. Every day at least six youth under 21 die from non-driving alcohol-related causes, such as drowning and suicide; sexual activity and delinquent behaviors also increase with underage drinking.

Parents who knowingly allow a person under age 21 to remain on their property while consuming or possessing alcoholic beverages can be prosecuted and face a jail sentence, fines and/or loss of property.

Adults providing alcohol to underage youth send a mixed message and can only add to a teenager’s confusion about the acceptability of drinking. They are also sending the message to teens that they do not have to obey the law. Research shows that most teenagers appreciate it when their parents set boundaries and establish expectations that are fairly enforced. Our youth deserve to live and grow to adulthood in an environment where alcohol is not misused. Let’s be unified in our message, and host alcohol-free parties with plenty of fun activities to show our youth that we care about their future.

In a Chautauqua County survey conducted by CASAC in 2011, 30.6% of 11th graders and 40.9% of 12th graders indicated they had used alcohol in the past 30 days; 25.2% of 11th and 12th graders had participated in binge drinking; and 68.6% of students surveyed think there is little or no risk associated with using alcohol Also, a majority of teens surveyed said that it is generally easy for underage youth to get alcohol 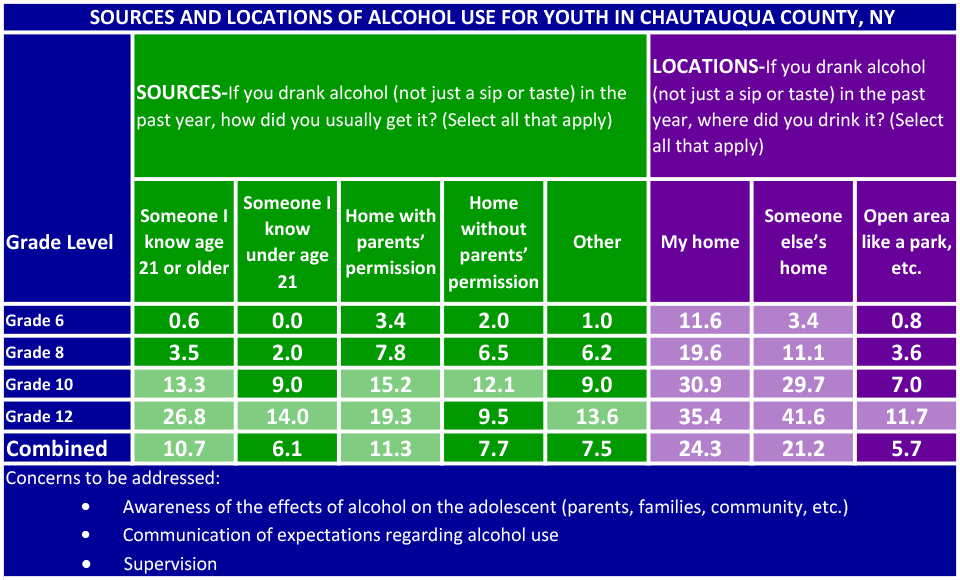 Scientific research shows the serious and damaging effects of alcohol on the developing brain of youth under the age of 21. Parents need to be educated about the laws and safety risks involved in underage drinking parties, and encourage a unified message that teen alcohol consumption is unhealthy, unsafe and unacceptable. 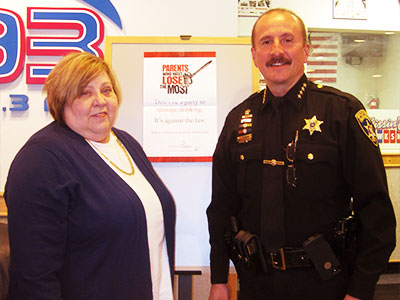